EVERYONE GETS PICKED FROM THE VIDEO THEY SUBMIT

I can’t stress the importance of your video!

Make sure the video you give us is a good video. The better the video, the better your chances.

There is a very good chance you will not get picked for the festival if your video is not able to be judged:

Turn your phone horizontal (sideways) filming your show with your phone vertical makes you small on the screen and hard to watch. 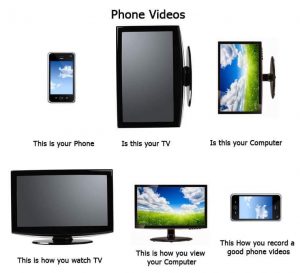 Don’t film yourself from the back of the room. We have gotten videos that look like they were filmed from outter space. We can’t judge you on stage presence if we cant see you.

Make sure we can hear your jokes. If the audio is very bad its hard to judge you on originality if we cant hear what is being said.

Buy a tripod. Don’t have your friend hopd your phone and move around while your on stage or laugh like a nut while your telling jokes.

Show your video to someone you trust and maybe dosent know your show. Ask them what you are saying. If they don’t know then we are not going to know.

We would like your video to be at least 5 minutes long. If you send in a video shorter than 5 minutes it better be great.

The video can be longer, but we will only be watching the first 5 minutes and no more than 5 minutes. If you have a 2 minute interview or intro or something that is not your standup, that means that less of your standup will be reviewed and that will hurt your chances of getting selected for The World Series of Comedy.

It’s ok to send a video that has been edited. The video doesn’t have to be edited, but it is ok to do so. We just don’t want to get a video that you edit the shit out of it. Don’t cut off your punchlines. Make sure you show us the entire joke before you cut to another video or joke.

Your video must be submitted to us as a YouTube or Vimeo link.

If your video is given to us any other way, it will not be reviewed. You will be able to paste your video link into the registration form. Please make sure your video link works and it goes to the video you want us to watch. Make sure it is not marked as private.

WHY YOUTUBE OR VIMEO?
There are several of us watching your video and we may not watch your video for months after you register. When you register your vidoe link is added to the 4 videos judges google scoring doc. They can not see each other scores the only have your name and your video link. This is setup this way to make the scoring as fair as we can and to also let the video judge be able to watch the videos when they have time. So everyone may watch your video at a different time so they have to have access to your video when they want to watch it. YouTube and vimeo give the judges the option.

You Can also give us you premium profile link for TheComic List.com